Under-rolling the safety nets is a very common process during the rigging of the type S nets.
But in some cases, the under-rolling is not so correct as it should be and the consequence is that it provokes some damages on the main meshes. 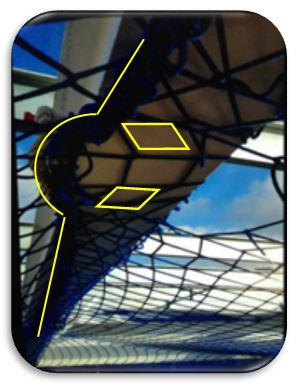 Sometimes we find that in the under-rolling process, and according to the photos displayed, the rolled is formed spinning not equally around its axis, generating that the square meshes lost the parallelism with it and causing that in some of them there were more tensile forces that the rest once the net have been installed so it produces some damages on the net. 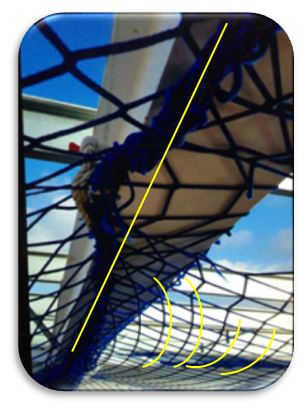 The border rope (and the rest of the rolled) has not an straight alignment, so the net has not been installed applying the same forces around the net and provoking the break in the overtensioned area because the net is not designed to absorb all the energy, being the border rope jointly with the main mesh the responsible of carrying out that aim.

Other times, more meshes than necessary were taken when the rolled was formed, placing traction on the meshes out of the rolled and probably causing the breaks of them. 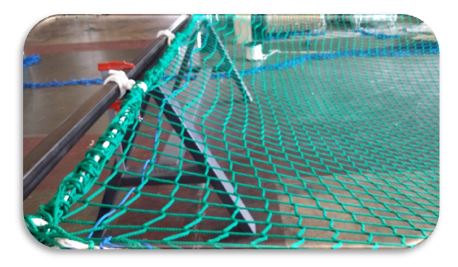 Continuedly, we include some examples regarding the possible tying of the net: a) Classic procedure Under-rolling tying perimeter rope and meshes at the same time.
The meshes are appreciably parallel to the rolled (see blue rope acting as a reference that we recommend to use at the time of rolling out the net) and the sag is not deformed. The problem would be that the tie rope jointly act over perimeter rope and meshes causing that the latter can be damaged as a result of friction between these elements and tensile forces, so this process should be improved. 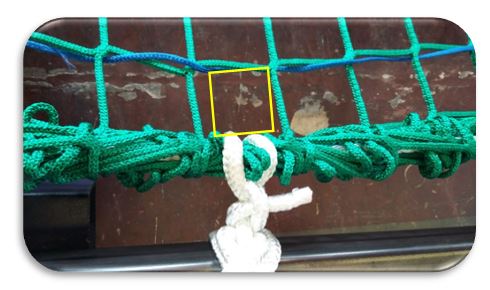 As a reference to take into consideration we must keep the meshes have a square shape
avoiding the diamond mesh shape, always resulting from its deformation is the unbalance of the meshes. 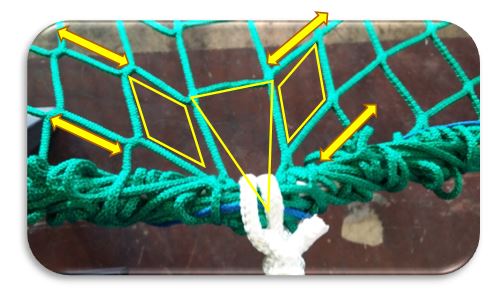 b) According to Visornets recommendations & best practice, improving the installation system proposed above 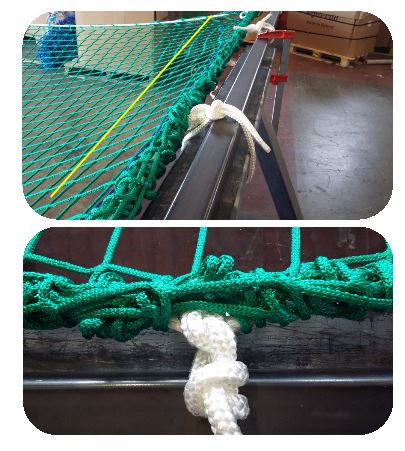 The meshes are parallel to the rolled (see blue rope acting as a reference) and the sag is not deformed.

Extract the border rope from the under-rolled net and attach the tie rope only on the first one. This way the main mesh will never suffer the consequences of friction or tensile forces.

<< Procure that that the tie rope only act over the perimeter rope in the under-rolling process, avoiding the possibility of having some breaks in the nets >>.

Do not hesitate to contact Visornets for any further information.