Visornets » Blog » UV radiation: How does it affect the useful life of safety nets?

UV radiation: How does it affect the useful life of safety nets?

UV radiation is part of the electromagnetic (light) spectrum that reaches the Earth from the sun. It has wavelengths shorter than visible light, making it invisible to the naked eye. These  wavelengths are classified as UVA, UVB, or UVC.

UVA rays reach the entire surface of the earth and occur throughout the year, even on the coldest and most cloud-covered days. They account for 95% of ultraviolet radiation.

UVB rays make up 5% of the ultraviolet radiation reaching us from the sun but their energy is considerably higher and therefore more damaging.

UVC rays have even more energy but fortunately do not penetrate our atmosphere.

Factors for a higher intensity of solar radiation

According to the World Health Organization (WHO), the greater or lesser intensity of the solar ultraviolet (UV) radiation we receive depends on factors such as:

Safety nets are usually manufactured from polymers such as polypropylene or polyamide/nylon. These polymers consist of long molecular chains that can vary in length, complexity and orientation. When exposed to UV radiation the molecular chain structures interact photo-chemically to form free radicals, which then react with oxygen in the atmosphere causing the exposed surfaces of the polymer to discolour, weaken and crack. It is therefore essential that a polymer’s formation includes a means of protecting it from such attack. To achieve this, UV stabilisers must be added to the polymer formulation.

The UV useful life of a net (as one of its main deteriorating factors) will depend among others on factors such as the UV additive level and type, pigment type, level and effectiveness of dispersion, and the geographic location where the net is used.

Solar radiation is not the same all over the world, as can be seen in an isoline diagram such as the one below, which shows typical levels of exposure to total annual radiation in kilo Langley (kLy): 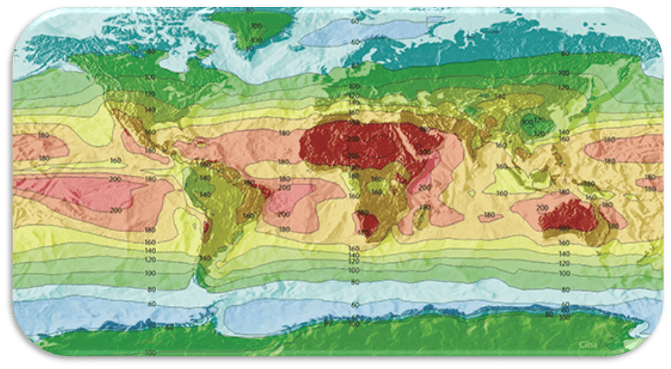 In short, although the netting yarns are UV stabilised, exposure to the sun will inevitably destroy the treatment after a few years. This is why you should always procure nets with a suitable anti-UV treatment to extend their useful life as much as possible and carry out the mandatory annual recertification tests to periodically check that they are still in a good state of