Visornets’ collective protection systems in the ‘Caleido Tower’ of Madrid

Our U, V and T type systems keep safe the personnel working in the Torre Caleido located in the Paseo de la Castellana of the capital

Visornets’ safety nets have been chosen as the collective safety systems to secure the staff that has worked during the last months in the construction of the fifth tower of Madrid, located in Paseo de la Castellana and officially known as Caleido.

Caleido tower is made up of a total of 35 floors and 181 meters high, and a base that extends to the right and left of the center that marks the tower itself. Caleido will constitute a multi-functional space. The Caleido facilities will house, at the base, a commercial area and a clinic; and in the tower, a university centre.

Collective protections of Visornets in the fifth tower of Madrid

During the construction process, the personnel who worked on the erection of Caleido were protected from falls at different levels thanks to the safety net systems provided by Visornets. Type V, Type T, and Type U safety nets were installed in the tower as a vertical enclosure. 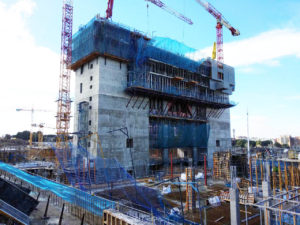 V-type nets are a system consisting of a safety net with a border rope attached to metal gallows by means of tying ropes. This way the fall of people and objects is limited from a maximum permitted height of 6 meters and recommended 3 meters.

For the vertical protection of Caleido’s personnel, in Visornets we supplied U-type safety net systems that acted as a vertical enclosure. In this way, the movements of the equipment were restricted, preventing falls at different levels. 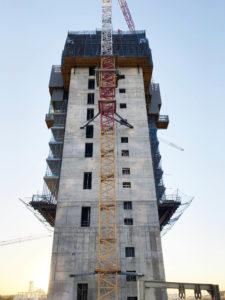 They also used our T-type safety net system, a system for arresting people and objects from falling. This system consists of a safety net attached on brackets for horizontal use.

From Visornets we are proud to have been part of the construction of the Caleido tower in Madrid. Soon it will become one of the icons of the city.